The ruler of Lelcar's eastern islet, Volga is a good-hearted man with a genuine sense of responsibility, a devotion to his morals.

Volga often raised orphans in Lelcar as his own. Kyle is one such orphan.

A surprisingly non-violent man, Volga only resolves violence if absolutely necessary. He diffuses a riot on Orok's mansion by stating he would go person, but the Prince, Lyon, and Kyle, in disguise, offer to go in his place.

After the conscripted men are rescued, Volga notices that the army is descending on the town. He gathers the men of his islet to fight, and assists in the evacuations of the western islet when it is set ablaze.

Volga joins the Prince's army, although he spends most of his time arguing with Orok. At the end of the war, Volga agrees to become the new Mayor of Lelcar, despite calling it a "friggin' desk job." - Matt 620 (article), Basel (image) 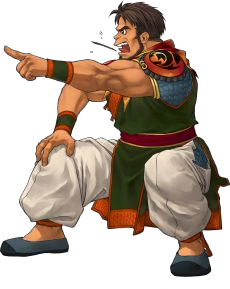