A straight-arrow soldier, Cius is one of the guard assigned to guard Lucretia Merces. From the beginning, he always had lingering doubts about her imprisonment, but as he talked with her, he was won over to her side, and learned the truth. Queen Arshtat imprisoned Lucretia to prevent Marscal from exceuting her. Although one of Lucretia's pupils, his talents stem towards being Lucretia's bodyguard more then a military strategist. When Shula Vayla asked to see the Prince, Cius suspected treachery immediately and went to protect her.

Cius is normally a hard-lined straight, and people marvel at Lucretia's ability to win him over. He's a stickler for rules, which makes it difficult from him to get along with the residents of Raftfleet. - Matt620 (article), Basel (image) 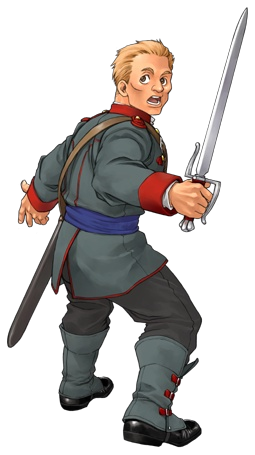