Son of Walter, a Scarlet Moon Empire officer, and Yohn, and demihuman from another universe, a fact he did not know (he believed Yohn was simply a travelling companion, who couldn't speak to begin with). As a young boy, he travelled with his father, learning how to fight, becoming very proficient at a very young age with his naginata, helped by his father, Yohn, and Andarc and Seneca. However, on the Pirate Steele's ship, Walter is turned into a fishmonster, and now hostile, killed by Andarc. Kyril is also badly injured in the battle, when Steele uses the Rune of Punishment in a suicide blast. He takes a long time to recover, and is not able to fight again for years -

Kyril gets the help of many others, including the Island Nations Federation King, Lino en Kuldes. Now with many Obelians in tow as allies, Kyril and his party travel throughout the Kooluk Empire, and soon find two enemies: Kooluk Imperials, and their old 'friend' Iskas and his Patriarchal Faction, usually accompanied by fish monsters. As they follow every lead they get about rune cannons and Iskas, the scheme is unraveled - a full coup being carried out by Iskas' Patriarchal Faction to gain control of the whole Kooluk Empire. They are unable to stop Martin and Julius from succoumbing to Iskas' Evil Eye, but are able to defeat Iskas at the Patriarchal Faction's secret facility.

After Iskas' defeat, an energy portal opens up above the Evil Eye. Yohn jumps in, and Kyril is unsure about what to do. Then his father's voice beckons him from the portal, and Kyril jumps in. Kyril is transported to a parallel dimension, where after destroying the Evil Eye, he finds Yohn again, now surprised to find she can talk. Walter's spirit reveals the truth to him - Yohn is his mother, and his purpose all along was to create a portal to her world. They are going to go, and he invites Kyril along. However, Kyril knows he doesn't belong in her world, and so returns via the portal to his friends on the rubble of Graska Palace, where he is 'borne' again into the world.

He returned to Scarlet Moon to live with his friends, but never felt at home. One day he simply left, never to return. - KoRnholio (article), Basel (image) 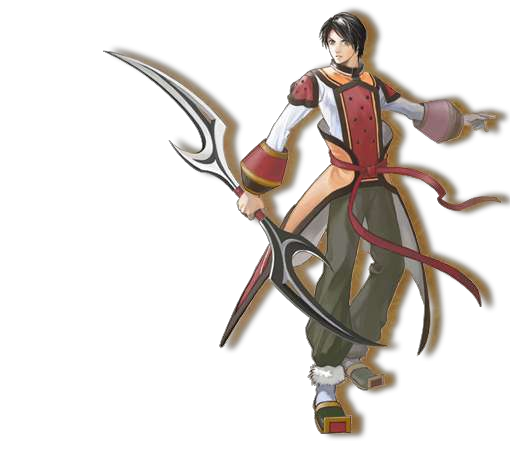