A fighter from Armes, Gavaya is known for asking different girls to marry him, before even knowing their names. Gavaya enjoys the company of many different women, although he is understandably unlucky in the love department, and is jealous of Kyle for his success and how the girls love to be teased by him. Gavaya is well-known in various fighting circuits and tourneys, even trying to get into the Sacred Games because of the prize of marrying Lymsleia. He was not allowed into the tournament, however, because he was from Armes. He joins the Prince's army when he saw all of the beautiful women in his army.

Gavaya knows Hazuki and Nikea from different tournament circuits, and bonds with the latter because they both did not get to enter the Sacred Games. Despite his brutish appearance, he is a gentleman when it comes to ladies. If he comes to fight a woman, he refuses to hurt her. Instead, he withdraws from competition. - Matt620 (article), Basel (image) 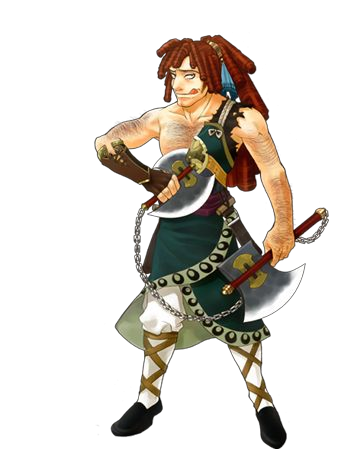