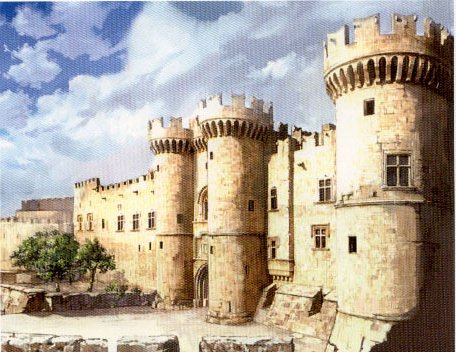 Razril is a bustling port town that used to be a part of Gaien, until the end of the Island Liberation War.. Even though the Knights of Gaien were posted here, Gaien didn't count them as being part of their country. Razril has a knights castle, located at the edge of the town and a backstreet located in the middle, it is usually full of pirates.

Headed by the skilled Commander Glen Cott and his Vice-Commander sorceress Katarina, the Knights of Razril were nearly unmatched with their secret method of communication, nasel birds. However, that secret was found out and Razril was surprise attacked by the Kooluk. They were repelled by Commander Glen (who was then the bearer of the Rune of Punishment), but Razril fell when the new commander, Snowe Vingerhut, sold out Razril to the Kooluk in exchange for them not becoming slaves. Gaien never sent aid to re-claim Razril, but the navy of the Island Nations was able to route the Kooluk fleet and re-claim Razril.

Razril gained independence from Gaien after the fall of Kooluk, Katarina became the new Commander and selected the strategist knight Keneth to be the new Vice-Commander.