While most of Suikoden is dead, the Prince of Falena is still having adventures in Pop'n World

A forum for all general Suikoden related topics.
Post Reply
2 posts • Page 1 of 1

While most of Suikoden is dead, the Prince of Falena is still having adventures in Pop'n World

For those who don't know, Konami made a rhythm game series called Pop'n Music and it dates back to 1998 as the release of the first arcade game release in the series. At time of writing, the 24th installment of the arcade game just came out this month. There are home console releases of the game too but they stopped at the 15th installment and are only released in Japan.
In the home console version of Pop'n Music 13, they added this song

A remix of the Queen's Knights theme from Suikoden V along with Prince Falena as a playable character.

The song and the character were added to the arcade in the 18th installment. 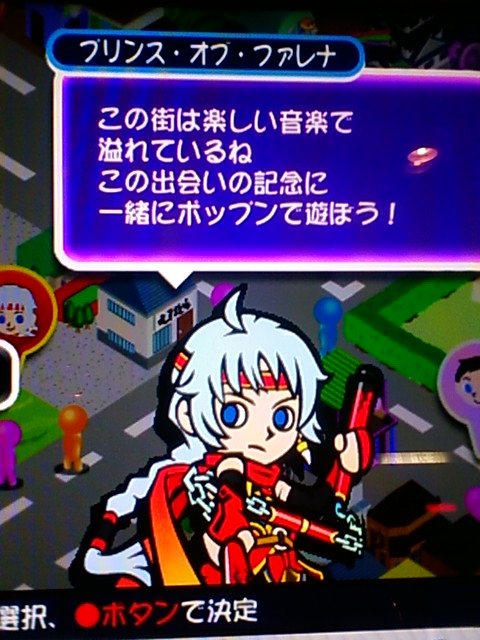 And here is a picture of Prince from Pop'n Music 19 in town mode where he is actually speaking! I believe it says:
"This town is overflowing with fun music isn't it?
In this meeting place, let's play Pop'n together!"

In Pop'n Music Lapistoria and beyond, characters have dialogue before a rhythm game and after it.

The Pop'n Music arcade arcade keeps every song and playable characters added in previous installments (a few songs are removed but all of them are licensed songs that come from anime or dramas so I assume copyright has something to do with it.) That means in this new installment that just hit Japanese arcades, while everything else in Suikoden is dead, Prince is having Pop'n battles with other characters in the Pop'n world. At least, that is assuming people pick Prince as their character or play The Queens' Knights amongst the hundreds of other songs and characters old and new.
Top

Re: While most of Suikoden is dead, the Prince of Falena is still having adventures in Pop'n World

Haha this is a cool find!!! Just goes to show that somehow, somewhere, Konami still remembers that this series exists.
Top
Post Reply
2 posts • Page 1 of 1

Users browsing this forum: No registered users and 4 guests