Kooluk
Caleron Laboratory
Fort El-Eal
Graska
Haruna
Merseto
Mido Shallows
Ruins of Collanbal
Secret Patriarchal Facility
Small Border Village
Xasta Grasslands
Remote linking to avatars
Do not link to Suikosource images on forums, webpages, or anyplace else. If you wish to use the images, place them in your own webspace. We do not allow you to use them from our server. 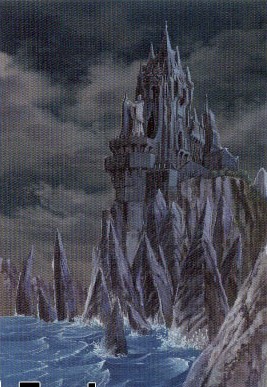 Fort El-Eal, on the border with the Island Nations, served as a stronghold and the major launching point for attacks on Kooluk's southern neighbors. It is a gigantic fortress with endless staircases and is protected by the ocean and unforgiving rocks at its base.

El-Eal was destroyed towards the end of the Island Liberation War, but it was being secretly rebuilt by Kooluk over the next few years. However, while the Empire was collapsing, its overstretched forces (led by Busk, who also had the task of keeping Merseto under control) could not keep a hold on the area, and Island Nations expeditions would soon pass freely through the fort into Kooluk's interior.