Not to be confused with Sarah the laundry girl from Suikoden 1 (although they are both excellent magicians). Sarah was born in an unknown village in Harmonia, but her great magical powers (she possessed a Flowing rune from birth) caused her to be looked upon as a witch by the townsfolk. A Harmonian Priest heard the rumors and took her away to be raised in a shrine in Holy Harmonia. Eventually Luc heard about the rumors and went to the shrine to see her.

She, still as a young girl, agreed to go with him, and so she lived with him and Leknaat at Leknaat's Magician's Tower for much of her older childhood. When Luc hatched his plan to destroy the world and "free" it from its destiny, she agreed to fully support and help him because she loved him, even though she did not wish to see so many people die. She assisted in his plot, among other things, by using her sorcery to trick the Lizard Clan and ignite the Zexen/Grasslands War.

However, the plot failed and she died along with her love at the Ceremonial Site, her soul finally at rest. - KoRnholio 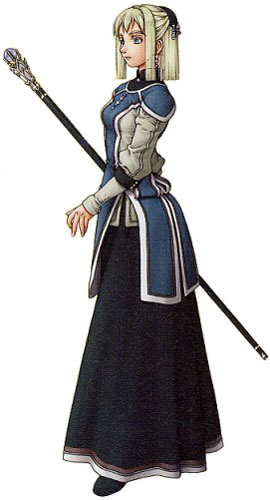