A mysterious young (at least in appearance) girl, Eresh is downright odd, from her method of speaking down to her dress. Even more mysterious is her familiarity with the ruins of the Ancient Armes Kingdom in the Big Hole northwest of Rainwall. She is the only known 'person' capable of reaching to the very depths of the ruins, even farther than the legendary runemistress Jeane (whom Eresh refers to as a 'comrade') could manage. Upon meeting the Prince and Jeane at the entrance to the ruins, she accompanied them and led them down to the bottom, where she released the powerful guardian of the ruins, Shepcesska. After destroying it, she decides to accompany the Prince's army.

Eresh dresses in clothes of the high-ranking clergy from Nagarea, however, only people who are at least double Eresh's young age can have such a position. Eresh also refers to herself in the third person, and in the Armes Ruins refers to her current form as a 'vessel'. The truth behind her is unknown. - Matt620 (article), Basel (image) 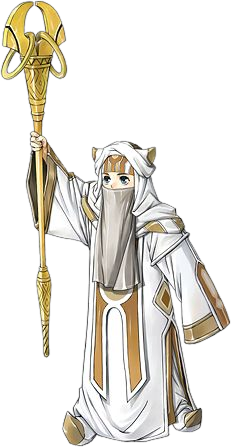