Lilin is one of the five mermaid sisters who were sought after by the Cray Trading Company for their skins. She hid in a cave on the Deserted Island where she hoped the poachers would not catch her. She soon meets Lazlo and party who are stranded on the island. After getting over her initial fear of the strangers, she begins to warm up to them when she realizes they are not after her skin and are friendly. She tells the party of the monster they should defeat on the island, and travels with them to Obel when they repair their ship and depart the island. She is mistaken for a captive taken by poachers by Dario the Pirate near Obel, who tries to free her by attacking the ship until he is stopped by his boss Kika. Safe on Lazlo's ship, and with his help, she finds her sisters one-by-one, and works with them in the accessory atelier on the ship. After the war, she returns with her sisters to the Deserted Island, but soon leaves in search of other missing mermaids. - KoRnholio 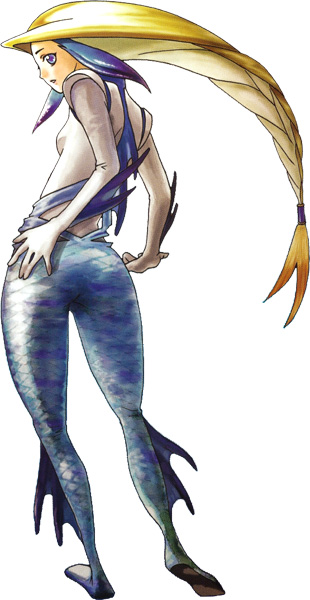