The middle beaver sibling of five, Muroon is an extremely intelligent beaver who designed the Hatred Fortress. He dilvulges this fact to Toma after he visits Beaver Lodge, and acknowledges that he should be blamed for building it. He doesn't know of a way to destroy Hatred Foretress conventionally, but Lucretia does, and asks Muroon to build other dams so that Lordlake won't be washed away by Lucretia's plan.

Muroon builds this dam, and after Lordlake is saved, he goes to the Prince's castle to make repairs on the newly-constructed docks. When the Prince notices him, he asks him to join his army, which Muroon accepts. Unlike most beavers, he does not believe in isolationism.

Muroon is an expert builder, constructing a hot spring for his sister Miroon after dwarves accidentally destroy her old one. He also acknowledges that beavers have been running around scared because they were afraid to interact with humans, hence Moroon's life as a wanderer and his racism. - Matt620 (article), Basel (image) 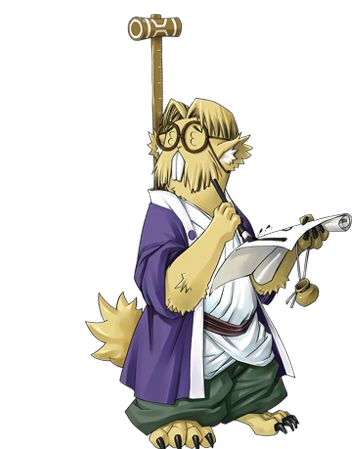