A trainee of the Dragon Cavalry, Nick is a young fighter whose dragon horse partner, Ax, are already as close as any full-fledged cavalry members. Nick is the star of his class, being the top at both swordsmanship and riding, but, like most kids his age, he slacks off at playing the flute, and as such, his flute-playing is downright horrible.

Nick was confused as to why the Godwins infested Gordius, or why they couldn't go down into the caves, so he, Ax, and his friend Yoran, a stable-boy for the horses, decide to investigate. Aided by the Prince, Roog, and Rahal, they discover that the eggs and foals of the dragon horses were held hostage, the reason for Craig's inactivity. Since dragon horses only lay their eggs in that one specific cave, holding them hostage threatens the future of the species.

Nick's part in the rescue of the dragon horses, was, coincidentally, his horrible flute playing. By playing so horribly, Ax and the other horses bleated loudly to get Nick to stop. The sound was so loud and horrible, Dolph couldn't keep focused. This let Georg get between Dolph and the eggs, saving them.

Nick joins the Prince's army, and rides alongside the dragon cavalry to help the Prince retake his castle.

Nick applies himself diligently, and, due to Haleth's gambling creating incentive, his riding has gotten much better. After the war, he becomes an official member, joining the Sun Palace Dragon Cavalry, now headed by Roog. - Matt620 (article), Basel (image) 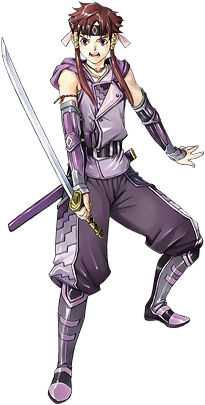