A high-ranking member of the Island Nations Federation Fleet under Skald Egan, Nelis is a subordinate under Yahr, and their job is to locate Rune Cannon shells. Although the shells can no longer be produced, ones made before the atelier Warlock died are still live ammunition and functional.

She and Yahr were sent to Nirva to investigate some shells, where they ran into the Prince and Bernadette. He gave them a ride on the Elemark, and on the ship, they saw a rune shell being fired. They asked the Prince to take them towards the light, and he agrees. They land in a nautical graveyard, where they find that some pirates were shipwrecked there, and they fired the shell as a signal to get people to show up.

Powerful creatures infested the graveyard. They destroyed the pirate's ship and were able to turn on the Elemark, but the Prince quickly decided to use the Cannon to blast the creature. After seeing it's power, the Prince said to destroy the cannon and prevent it's misuse. Although Nelis doesn't like the idea because it's contrary to orders, Yahr agrees and does so.

Nelis specifically volunteered for the assignment of gathering Rune Shells, whereas Yahr just took the job because it was "cushy." Nelis's family (she was descended from Pablo) was influential in the creation of the cannons, and, although Nelis does not have the ability to create the shells or cannons, she still feels family guilt.

After the war, Yahr and Nelis destroy all the Rune Shells in the custody of the Obel Fleet and disappear. - Matt620 (article), Basel (image) 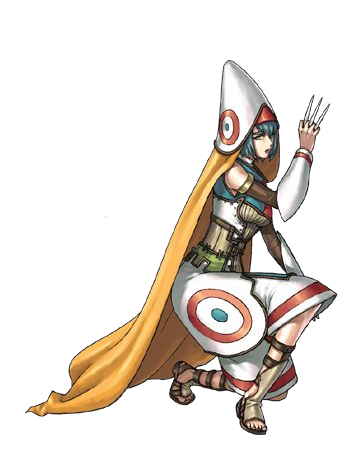