An elf from Alseid, a small isolated elven community downriver from Lunas, Urda is the childhood friend of Isato. Urda has constantly tried to bring Isato home to Alseid when he spends so much time in Lunas.

When war breaks out, Urda wants Isato to come home, however, Isato needs to protect Lunas from being mined for gold dust. Urda does not realize that, without the Oracle of Lunas, nobles would mine the gold north from Lunas, and damage Alseid.

Urda is racist to the point that she considers all humans "barbarous." She pays no respect to any human and only acknowledges the Prince to the extent that she believes Isato is held in Lunas because the royal family has ordered it.

Urda's first foray into Lunas ends in failure. Believing that Isato is staying because Haswar is not in Lunas and needs to protect Lunas in her absence, she waits until after the Queen's Campaign, when Haswar returns to Lunas. Urda asks Haswar if Isato can leave, to which she replies that he may if he chooses, since Haswar is going to the Prince's castle. Isato claims he wants to go with her as well, while Urda states that, to protect Isato, she will go as well.

Urda's racist tendencies do not diminish, and the absurdities of her arguments quickly ensue when she argues with Cathari over guns.

In the end, Urda does not convince Isato to return home. She instead, opts a rovving life that makes her travel between Alseid and Lunas extensively. - Matt 620 (article), Basel (image) 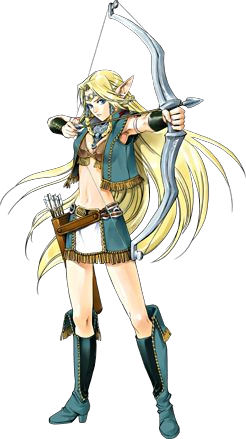